POLITICAL PARTIES AND THE ORIGIN OF REGIONAL AUTONOMY IN INDONESIA 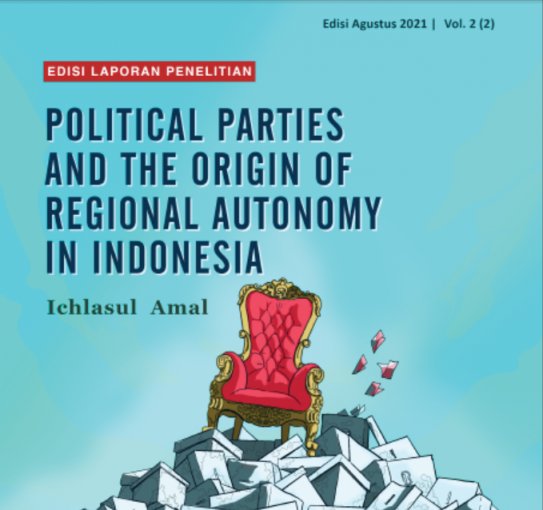 In its effort to implement democratization and modernizing the governance, Indonesian political leaders has issued regulations to promulgate decentralization and regional autonomy through the law number 22 of 1999, revised by the law number 32 of 2004, and the latest law number 23 of 2014. Both the leaders and the people believe that developing regional autonomy is a positive way for a better Indonesia. According to a survey by Lingkaran Survey Indonesia (LSI), 73% of respondents are supporting regional autonomy (Mietzner, 2013). In other survey in 2011, LSI found that 66% of respondents supporting regional direct election (Mietzner, 2013). Both of those regulations issued by the lawmakers and those surveys on people’s perspectives are showing that Indonesians have a consensus to moving towards a regional autonomy.
However, the implementations of decentralization are not without problems. For example, in the last decade, there are 223 newly established regions. Among those new regions, 80% are still dependent to the central government’s budget. For these regions, 90% of the budget is being used for civil servicemen’s salary (Tempo, 2016). As the result, public service and social security for the people is neglected. Up to now, there are about 15 overleaping regulations which are in some way hampered the implementation of the other regulations. This condition has created confusions, and in other way provides opportunities for local political elites to maneuver and exploit these overleaping regulations for their own economic benefits; controlling resources; and dominating local politics.
Considering the importance of regional autonomy and the problems occurred, this research aims to provide a better perspective in understanding the structure in formulating regional autonomy in Indonesia. Only by a clear understanding on the origins and influential factors of Indonesian decentralization, we could solve the problems. However, a thorough political study in Indonesian decentralization is still limited. At present times, there are many discussions on regional autonomy and no final conclusion on the how to effectively manage the implementation of it. Many Indonesian experts were trapped at understanding decentralization as a mere matter of governance, laws, and regulations. In Indonesia, scholars and students of government and political sciences point out that the weakness of political parties contributes to create difficulties in practicing the implementation. This research is positioning itself to provide a political perspective and pin-pointing at the hearth of the process of the creation of decentralization and regional autonomy concept in Indonesia which is actually the product of the dynamics of political parties.